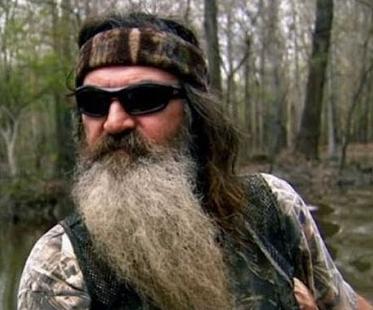 In this past month's news the patriarch of beloved reality television family of 'Duck Dynasty' publicly spoke against the gay lifestyle. He cites the bible as his main source of information about his own ethical representation of homosexuality. Phil Robertson's new interview in the January edition of GQ states, among many other things, "But hey, sin: It's not logical, my man. It's just not logical." Post interview an official statement was made that Robertson was removed from the show, which can be viewed only as damage control since new episodes set to air in January will still feature the family patriarch.

Modern society has deemed religion based theory off limits for interviews such as GQ, which is one reason why Robertson's bible based fodder is causing outrage across the country. Another reason for the nationwide uproar after the anti-gay statements is largely due to the views in the bible that he holds on to being considered highly outdated by some sects of Christians. This notion brings up a bigger question, how does one follow the teachings of their holy book without following the path of Phil Robertson to the realm of a social pariah. Today American society is a melting pot comprised of practitioners of many religions that stand by morals pertaining to many holy books. In each religious text there are statements that can be viewed in modern terms as ludicrous, or are simply overlooked by the most pious of followers.

At the time of writing a religious text it can be assumed that modern political and socioeconomic factors come into play that are associated with the time period. Each text of a religious nature could be said to be a combination of ego and divine intervention, as a follower of the religion it is one's duty to continue to measure the temperature of the current political and social climate of their world before violently following particular rules. This is not to say that the bible or Koran are malleable, but that there should always be healthy self-reflection within one's religious practice, similar to ideals within the practice of Hinduism. Applying this utilitarian ideal to any practicing religion can perhaps allow one to remain objectively subjective with their morals and ethics. America will continue to grant all citizens equal rights no matter their religion, so learning to live peacefully together is the only way to live blissfully.