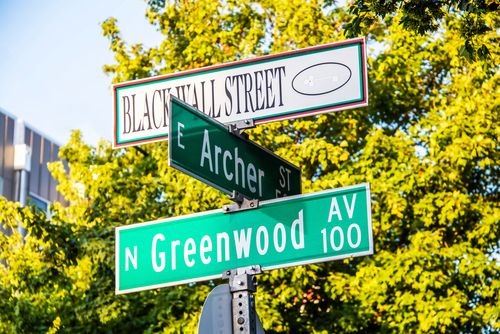 The year 2021 marked the 100th anniversary of the Tulsa race riot, which is considered one of the worst incidents of racial violence in the United States. Sadly, even people who grew up in Oklahoma often haven’t studied the incident as part of Oklahoma history. It’s not surprising if you haven’t heard of this terrible tragedy that injured more than 800 and reportedly killed more than 100.

The Origins of the Massacre

In 1921, over Memorial Day weekend, a 19-year-old Black shoe shiner was accused of assaulting a 17-year-old White elevator operator. The woman told the police that the man grabbed her arm. She did not want to press charges, but the police arrested him anyway. The sheriff attempted to protect the Black man, because the White residents of the town were suggesting a lynching. Black residents of the local community gathered to try and help the sheriff protect the man. The White men saw this as an “uprising” and became enraged.

Tulsa was a booming oil city with a large number of affluent and professional African American people who lived in a community known as Greenwood, aka the Negro Wall Street. Although Oklahoma was not strictly segregated at the time of its first Constitution, there were many laws that disenfranchised Black Americans living in Oklahoma. Tulsa mandated segregation within its city limits. Greenwood had tremendous economic growth, considering the times.

The mob outside the courthouse grew, and both Whites and Blacks congregated. In Greenwood, it was rumored that Whites were storming the courthouse. The Blacks went to offer their help to the sheriff, who declined. Tensions were high outside the courthouse. One gunshot led to more. During this first “battle,” ten Whites and two Black men were killed. The White mob pushed the Black men back to Greenwood. More Blacks joined the group when they were leaving the theater after a show. Although they were innocent bystanders, the White mob fired on Black people in the chaos. The National Guard was deployed to round up the Black crowd. The White crowd gathered around the courthouse in support of lynching the shoe shiner.

Fighting continued over the next few days. The White mob fired into Greenwood stores and homes at first. Then they began setting fires to the commercial buildings in Greenwood. The Tulsa Fire Department was turned away at gunpoint from the White crowd. The rioting continued and the White mob launched an assault on Greenwood. White rioters looted buildings. They broke into the residences of the Black community and forced people into detention. An airstrike was launched. Eyewitnesses testified that bombs were dropped from the planes, but this is contested by other accounts of the incident.

Casualties of the Incident

The Oklahoma National Guard declared martial law at 11:49 a.m. on Wednesday, June 1. By noon, the violence had been suppressed. There was a high cost. It’s estimated that 6,000 Greenwood residents were interned at local facilities. Thousands of residents fled the city. The fires destroyed an estimated 35 blocks in Greenwood. The number of deaths reported varies: The Oklahoma Department of Vital Statistics records 26 Black and 10 White deaths; the Tulsa Tribune reported 176 dead. A 2001 commission estimates 100 to 300 deaths, but even this figure is highly debated. Currently, the Tulsa Race Massacre Commission is studying different sites to find potential mass graves.

Don’t Forget the Past

As current events remind us about #BlackLivesMatter, it’s important to remember the past and to learn more about racial violence in the United States. The shoe shiner accused of assault was never prosecuted. What happened to him after the riots is largely unknown. Tulsa honored the victims this year on the anniversary with a candlelight vigil. It’s hoped that by revisiting this horrible event, the victims and their families find justice.