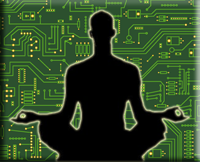 As a 30-year professional technologist and a lifelong student of spirituality, I am fascinated by the ways technology and spirituality intersect. I've been invited to share my thoughts on these subjects here periodically and I welcome the opportunity to do so.

I've been doing a lot of study of Facebook lately for my "day job" as a technology visionary for the Web development agency in which I am a partner. So naturally when I decided to write my first post on spirituality and technology, I gravitated to a piece on Facebook's role and impact.

Facebook is an incredible phenomenon. It recently announced it had passed the 500 million mark in membership. Half a billion people have Facebook accounts. They use them for all kinds of communication with their circle of friends, people you invite or accept into your circle. It is by far the largest social networking site on the Internet. Chances are most of your friends are already on Facebook. Lest you think it is just for the younger set, the fastest-growing segment of the population joining Facebook these days is men and women aged 45-65.

So how do churches and spiritual leaders and teachers use Facebook? I was pretty surprised to find out how many really creative ideas our peers have come up with to leverage Facebook. Here are the primary ones and a few thoughts about each that might help you if you're interested in building or broadening your ULC ministry.

Thousands (perhaps tens of thousands) of churches use Facebook as their primary or only online community gathering place. Many churches which used to host their own online forums have switched to Facebook, apparently on the theory of "going where the folks already are". Many others have come later to the awareness of the value of these virtual gatherings and have more naturally begun their efforts on Facebook. In both cases, nurturing in the online world takes on a whole new dimension; not just ministers and leaders can help members of the community, but there is opportunity for a great deal of mutual member assistance. This, in turn, deepens a community's connections to one another, which obviously provides an opportunity for deeper enrichment of everyone's spiritual experience.

The interest on the part of churches in using Facebook as a community platform has resulted in the creation of one Facebook application called MyChurch that provides a format and a structure for such groups. The application is specifically tailored for Christian churches that accept the Nicene Creed, according to the company that offers the service for a wide range of monthly fees depending on size and feature set.

An interesting variation on this online community approach is the use by many ministers and spiritual teachers of Facebook "feeds" as significant if not primary input to their prayer lists. Whether or not a church has a formal community presence on Facebook, if congregants "friend" their minister and the minister reads her congregants' entries, an alert spiritual leader can become aware of problems and prayer needs -- as well as reasons to rejoice -- much more quickly and in greater detail than has generally been possible. (Of course, this benefit has a potential downside; I have read comments from some church-going folks who were somewhat surprised when their minister contacted them about a Facebook post. Even though they may have "Liked" the minister, they didn't realize their comments were available, by default, to everyone in their list.

Another popular way churches have been using Facebook is as an advertising medium. Facebook advertising is remarkably affordable and, like advertising with Google AdWords, allows the church to set a daily maximum budget amount for ad spending. The real power of this advertising is the easily accessible ability to target the ad to the area and demographic that a particular church or ad campaign is likely to interest. It is easy, e.g., to focus an ad on people who live in a given city, fall between given ages, have a family status that matches your existing community's and expresses interest in one or more topics.

Churches have reported great success recruiting young families and children for summer "Vacation Bible Schools" and similar activities, and in drawing seniors to a study aimed principally at people in their Golden Years (named, my curmudgeonly late father often said, by someone who hadn't actually lived through them) interested in medicine and/or ethics.

I'm sure there are lots of other ways churches, religion and spirituality are being evidenced on Facebook. If you have a good anecdote or insight to share on the subject, I hope you'll pass it along to me.

Interestingly, ULC Ministries ministers have a fairly large showing on Facebook. I ran across several dozen ministers advertising their availability for spiritual ceremonies.

(While I'm on this subject, you should know there is a Universal Life Church Ministries group on Facebook that is absolutely not connected to our beloved interfaith movement.Ã‚ It is dedicated to fundamentalist Christianity and the King James Version of the Bible.)