6 Quotes to Inspire You to Activism 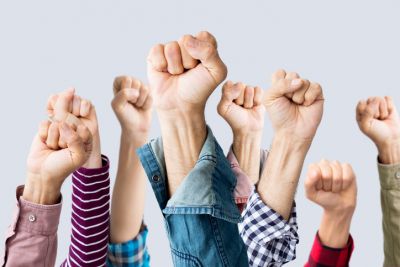 How many roads must a man walk down

Before they can call him a man?

How many seas must a white dove sail

Before she sleeps in the sand?

How many times must the cannon balls fly

Before they're forever banned?

The answer, my friend, is blowin' in the wind

The answer is blowin' in the wind…

How many times must a man look up

Before he can see the sky?

How many ears must one man have

Before he can hear people cry?

How many deaths will it take 'til he knows

That too many people have died?

The answer, my friend, is blowin' in the wind

The answer is blowin' in the wind

The answer is blowin' in the wind

Bob Dylan wrote the above lyrics in 1962. He asks rhetorical questions about freedom, peace and war, implying that the answer is simple, but intangible. This song is listed #14 on Rolling Stone magazine’s list of “500 Greatest Songs of All Time.” The lyrics became an anthem of the civil rights movement. Considering the current politicians in office, it’s more important than ever to be a voice of activism.

Activism is defined as “the policy or action of using vigorous campaigning to bring about political or social change.” Often, we think of activism as being some extravagant gesture. According to Patricia Hill Collins, “Most activism is brought about by us ordinary people.” It’s time to find your voice.

Let these six quotes inspire you to be more socially and politically active:

“I wish when I was 15 that I realized my voice was important and that even my thoughts and my opinions had value. Had I known, I probably would've spoken up more. I probably would've found my activism sooner and become a writer sooner.” –Angie Thomas

“Joy doesn't betray but sustains activism. And when you face a politics that aspires to make you fearful, alienated and isolated, joy is a fine initial act of insurrection.” –Rebecca Solnit

“Whenever anybody gets involved in politics, it’s always exciting for me because we take for granted our freedoms and our abilities to effect change through political activism.” –Emily Saliers

“There's enormous progressive activism and, more often than not, success at the grassroots level—everything from living wage campaigns to efforts to finance our elections are having terrific success.” –Jim Hightower

“Activism isn't beautiful and easy, or a bunch of people getting together and picketing; it's a lot more complicated and difficult than that.” –Matt Bomer

“I have started using the expression 'compassionate activism': It's about keeping my heart open so that I can understand the point of view of the other person.” –Tracee Ellis Ross

Some believe that art can be activism. Bob Dylan certainly showed us that music is activism. Philanthropy can be activism. Pouring your efforts into helping the homeless is activism. Films can open the dialogue of change. Activism has to be organic. You have to care about the problem, whether it’s domestic violence, sexual assault, LGBTQ+ rights or the Affordable Care Act.

You may not have access to the president or one of his advisors, but you can contact your state legislators and tell them what you think. Your voice, when joined with others, makes a difference. Change takes time, but it won’t happen without activism. Instead of signing an online petition, make a call or email your senator or representative. Meet your legislators when they come to your area. Find out where they stand on certain issues and why.

Activism works. Most of the civil rights issues were fought locally by activists before they went to the federal level. It was a long road to earning the right for same-sex couples to marry, but now they can in the United States. Don’t give up because it seems dark.