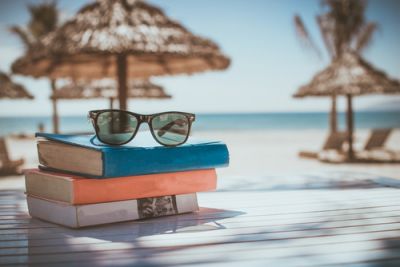 This season may be coming to a close, but that doesn't mean you can't take a break from the fast pace of living this summer by picking up a book or two. Here are some newly published tomes that will give you a broader view of other cultures, religions and history to inspire you to live a spiritual life, regardless of your beliefs.

Rev. Dr. Prathia Laura Ann Hall was a leader of the Civil Rights movement and in African American theology. She was a pioneer in feminist thought and social justice. It’s likely that her work influenced Dr. Martin Luther King, Jr. and other women scholars in the 1960s. This biography that focuses on her work might be a little heavy for beach reading, but it’s inspirational for women fighting for justice and equality today.

“Sing This at My Funeral: A Memoir of Fathers and Sons” by David Slucki

This memoir chronicles three generations of Jewish men. Jakob, David’s grandfather, was a Holocaust survivor who lost his first wife and two sons in a Nazi death camp. David tells a unique story of what it was like to grow up in a family that suffered so much. The historical aspect of the memoir is the reason to pick it up. Slucki interviewed many people and used historical documents and letters to be as accurate as possible. You may find it difficult to stop reading because the story of the family will draw you in.

Read the stories of women in Africa who are spiritual leaders exercising their authority under Islam. Using values that nurture motherhood and other traditional roles of women, these leaders are changing their communites through gender roles and the “transcendence of gender.” This book is a fascinating look at how women are powerful, even when the culture doesn’t seem to allow them to be.

“Your Sister in the Gospel: The Life of Jane Manning James, a Nineteenth-Century Black Mormon” by Quincy D. Newell

Jane Manning James was a free black woman who worked as a servant for Joseph Smith. Later, she worked in Brigham Young’s home. Although she touched the most powerful figures in the Mormon Church, she was barred from participating in the rituals of her faith. Even under such severe discrimination and racism, she remained faithful to the Latter-day Saints. James is an unknown figure in history, but her story is important to how race and discrimination are understood today.

“Reforming Sodom: Protestants and the Rise of Gay Rights” by Heather R. White

This book is a treaty on the role of liberal Protestants in the debate on sexual identity in the church. White presents both sides to provide historical context for where we are today in the church and spirituality. It’s a great look at the intersection of religion and sexuality that helps the reader find context in today’s challenging atmosphere. White is an amazing researcher who dares to go into this complex subject.

It’s easy to forget that when rock ‘n’ roll began in the 1950s, it was denigrated from the pulpit. Religious leaders warned that the music was demonic and evil. Today, Christian rock is a multi-billion-dollar industry. Learn how rock was transformed into a vehicle to express the Christian message in this account that looks at the history of rock through to today’s culture.

Pick Up a Book This Summer

You're never too old to stop learning. Books offer knowledge and information on topics that specifically interest you. Take a book with you to the beach while you relax and feed your mind.

I washappy usingmy firstand last namewithout my middle name, Bernard, at muzzecko@gmail.com, but the cracked screen of my old phone got wet nearly a week ago and quit working, so I'm trying to figure out how to use this new fangled contraption, and am still not too terribly technologicallyor Internet savvy, so I am proving to myself. Too many memory questions about old passwords and phone numbers just to get back to where I was a few days ago. So, I'm finding that the onlyway I can continue where I left off is to change my name, and get a new e-mail address. I'm not pulling a Bob Fleutsch / Flugo (or whatever his name is now) on yall, but the only I could think of to get back on this blog was to become ordained again. Next I need to figure out how to read the comments of ministers on this phone. It seems like every one of these phones are totally different. It might take a few more days to figure it out, so dont worry about me. I'll be back to preaching sermons in practically no time!

Power of Christ: Present in the assembly of saints as far as minded found minister follow after; of reputation servants.

Power of Christ: Present in the assembly of saints as far as minded found minister follow after; of reputation servants.