When we hunted the land for our food and slept under the stars or in caves, we were considered primitive. When we did not worship gods or deities but the earth and stars in the sky, we were called uncivilized. Man understood that the land gave him and his people everything they needed. As man evolved, this all changed. He was called civilized and advanced. He discovered how to build cities, cultivate his land, wage war, conquer enemies, and worship mighty Gods. The worst of these lessons was learning to enslave others. In order for us to understand why slavery existed, we first need to understand what it is. We need to understand how the most sophisticated civilizations in man's recorded history can create something as vulgar as slavery. It is also important to understand how past conflicts involving religion have played in the existence of slavery.

Every major society in mankind has had some form of slavery. Sumeria, Greece, Rome, Sparta, Persia, and many more cultures have used slavery as a form of power or risen to power with it. Slavery is defined as forced and oppressed labor by which all freedom and rights are taken away. Some may argue that slavery is justified or a way of life. Others have seen it as a way of ripping families apart or destroying someone's humanity. Regardless of how it is seen, it is something that every civilized culture has experienced or been a part of.

Ancient civilizations like Rome imprisoned the people they conquered. The Roman Empire persecuted and enslaved anyone not of Roman birth. While the citizens of Rome worshiped many Gods like Zeus and Ares, Christians worshiped only one and considered him the one true God. When the Christian religion emerged, it contraindicated everything Rome stood for. Thousands of years of Rome's history were based on its beliefs; Christianity threatened it. Centuries of Christian persecution, slavery, and death continued in Rome until it was brought to an end by Emperors Constantine and Theodosius 1.

Rome was not the only society to use religion as a way of controlling others. The Spanish Inquisition went to other lands to convert natives to Christianity and find riches. Natives were told to convert and become Christians or be sentenced to death. Those that did convert were brought to the continents and sold as slaves. They were given Christian names and made to wear clothing. The fact that these people were originally found on islands or lands that did not have anything to do with Spain, shows how determined religion can be. 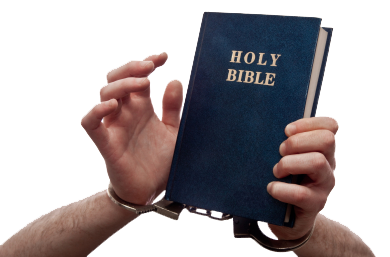 There are some Christian religions that condone slavery and the imprisonment of others. In the American south, slave masters defended owning Africans and their descendants because it was thought to be necessary in order for the southern economy to flourish. It was the southern way of life. Others argued that it was God's will to own slaves and would end when God ordained it to. Whatever the reasons, it did not change the fact that slaves were owned by very religious, god-fearing Christians. Religion may be the one thing in the world that can control or influence something so blindly that it overrules everything else. It is also the only thing that does not have to justify its actions.

Religion has the power to destroy or save a society. It can be based on fear, love, or power. But when it is used to control and imprison others, it ceases to be anything but a weapon. The most advanced societies were once based on the oppression of others. These societies maintained control and absolute power because they knew how to take away freedom and replace it with fear.

With every suppressed culture, comes a day when freedom releases it. Slavery was once the most prosperous trade in the world. It has touched almost every culture and society in history and been protected by religious beliefs. With time and healing, it has become a lesson of the past. It is to be feared and respected because to lose your freedom is to lose your humanity.