NBC Under Fire for Not Being Under God

Omitting parts of the Pledge of Allegiance during a US Open Broadcast creates a firestorm of fury from religious organizations. 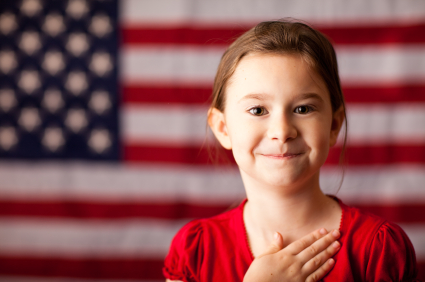 On June 19, 2011, NBC made a mistake they are sure to regret long into the future. During the opening montage of the Pledge of Allegiance for the US Open, a Grand Slam tennis tournament, NBC producers omitted "under God" and "indivisible" and found themselves under attack by religious groups.

Dan Hicks, a commentator for the event, immediately apologized. "It was our intent to begin our coverage of this U.S. Open championship with a feature that captured the patriotism of our national championship being here in our nation's capital for the third time," Hicks explained. "Regrettably, a portion of the pledge of allegiance that was in that feature was edited out."

According to NBC this intentional omission was a decision made by a small group of producers and the network considers it a very bad decision. Religious groups' disdain at the omission was proclaimed loud and clear. From Jordan Sekulow at the American Center for Law and Justice who raged about the importance of the line, a line which had been "a critical part of the pledge for the last half century."

The loudest response, one which could almost be considered hysterical, was that of Dan Gainor from the Media Research Center. He and his affiliates feel that the response on the part of NBC was "too little, too late" and that the "pathetic apology" which is an example of "how public mention of God is under attack in our nation." And that though having issued the apology, it wasn't enough and NBC was "refusing to admit what they had done."

And what exactly did they do? They edited a piece of Americana that originally started out as anti-communist rhetoric. Though at the time America could have been considered a Christian nation, the placement of a deity in the pledge was meant to highlight the absence of deity and religion in the USSR, not to praise a God in which only some believed. The USSR was our enemy and they did not believe in God, therefore America was devout. Thus the pledge shifted from oath to public prayer.

The phrase "under God" was added to the pledge of allegiance in 1954, during the McCarthy era and a dozen years after the adoption of the pledge. Originally, this oath was not intended to be a public prayer and was written by Francis Bellamy, a Baptist pastor and socialist, in the late 19th century. It was also designed to protect immigrants from being considered unpatriotic or becoming radicalized.

This is not believed to be its use now. In fact, this oath is an example of hysteria and indoctrination that swept the post-WWII United States.

Further, the argument that America is a Christian nation, and has always been that way, is false. America was originally a haven for those who faced religious persecution. A nation founded first and foremost on the right to free speech and freedom of religion. In fact, the founding fathers, the people whose words these groups say we should live by, were decidedly not religious. Thomas Jefferson once said that lighthouses were far more useful than churches.

So what exactly was NBC's offense? Offending religious groups and exercising the very same rights which those groups like the Media Research Center (MRC) seek to defend. The MRC screams about liberal bias while flaunting bigotry and hatred against homosexuals and demonizing prominent leftist political figures. Fighting bias with more bias, and thus further convoluting and distorting the idea of an unbiased media, one of the most important freedoms and a powerful watchdog in a democratic society.

The real question in the matter, really though, should be "what would Jesus do?" The answer: forgive those producers and move on to real problems.