Military Funerals Continue To Be Impacted by COVID-19 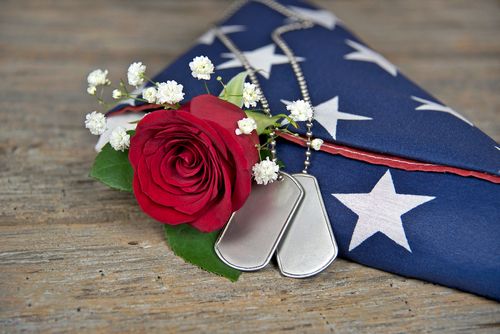 While many areas are starting to slowly open back up in the United States, there are still restrictions on groups over a certain size. These restrictions have caused a lot of things to be put on hold, including sensitive events such as funerals for deceased family members. Despite lifting restrictions in several states, funerals at national cemeteries are currently limited to as few as five people who can watch the event from a distance. For many families, the realization that their last goodbye for a relative who has passed away is going to be disrupted in this way is heartbreaking. There are many different ways families are coping, but in the case of military funerals in particular, there seems to be little that can be done to replace the feeling of a traditional burial.

Sadly, some of the most affected funerals are those of recently deceased military veterans. In normal times, these are honorable events often attended by dozens of friends and family members. Now, the relatives of those who have passed can only watch funeral proceedings from their cars or stand back at the street. Being near the graveside remains strictly off limits. This presents a challenge and takes an emotional toll on observers who are unable to interact in any intimate way. In interviews about these funerals, friends and family members often lament the lack of being close to others who have shared the loss. Many feel a lack of closure in the aftermath of the socially distant burial.

Military funerals are often marked by a rifle salute and the folding of a flag. The flag and rifle casings are given to the family to keep after their loved one has been buried. The family sits and observes these events, which are meant to honor and celebrate the life of a person who has dedicated themselves to serving their country. All of this has currently been replaced with a speedy funeral that lacks all of the traditions that generally mean so much. Funerals that once would have been packed with observers are done in emptiness.

Another example of poor timing in regard to the virus was the cancellation of many events that usually take place on Memorial Day. For loved ones of newly deceased veterans and those who passed away long ago alike, the day, which would usually be one for gathering in remembrance in cemeteries, was marked by the disruption of tradition.

While the situation can seem bleak, there are ways that families are handling their loss to ensure that the dead still receive a funeral that honors them. For many, the best option may be cremation and keeping their loved one's ashes until a date when a more traditional ceremony can take place. While waiting for the sense of closure that a funeral often brings can be difficult, it seems to be the only way to be able to get all friends and family to the future funeral. Many churches and funeral homes are working with these families to ensure that the cremations themselves are done in an honorable way and that the family gets the support they need.

Hope for the Future

Military funerals have been especially affected by the outbreak of COVID-19. Rather than gathering together around the grave, families are now only allowed to watch proceedings from afar, and even then only in groups of 10 or less. The current situation is difficult and often very sad for both the families and friends who have lost someone recently and those observing from outside. Hope for the future has helped many cope with the situation as they wait for the day when they can gather in memory of the person who has passed.