I am a liberal. I freely admit it. In fact, I will admit to being so liberal I could make Edward Kennedy look like a Ronald Reagan clone.

I was born in the late 1950's, too young to really understand the 60's at the time, and a thoroughly committed product of the 70's. The Civil Rights battles were already fought by the time I went to college. We were told, and we believed, that the old days of hating people because they were of a different color were behind us. Now, we did still have the battles over sexual orientation to wage, and gender identification, and all those other thorny issues that still plague us to a point today, but at least we knew that racism was dead. I'm not saying that you saw a lot of integration, but it was more than we had seen before, and that was a good thing, right?

Fast forward to today. I, the raging liberal, work for a rather large corporation. Define "rather large" as Fortune 50. I work in sales, and get to meet a lot of people every day. And, I can say with all honesty, that in the past 6 months, I have seen and heard more instances of racism than I can remember in my lifetime, including the 70's. It is shocking, surprising, maddening, and saddening. I have heard the "N" word used by customers who think they are being funny, or actually expressing their feelings. I have seen racist cartoons and text messages on their phones, and felt their true hatred for those of a different color or nationality.

Understand, I don't live in the middle of nowhere. I live, and work, in a major Midwestern city, with a long history of union support and liberalism. There is a large black population, Hispanic population, Asian population. It is diverse and alive. And yet, now in the twenty first century, the racism is alive and well.

In addition to the racial diversity, there is also a pagan population here, one that we are even now trying to identify and unify. There is a large and growing gay community and a wide range of religious belief, from traditional Christian to Muslim, to a large and visible Jewish population. Add in the Scientologists and other such groups and it all adds up to a city that should be a Mecca of diversity and acceptance.

ButÃ¢ .experience tells me otherwise. The hatred seems so alive and so fresh. Something I have not encountered before. It is visceral and raw. The religious right seems to be the ones most in agreement with it. Conservative churches offer financial seminars and self help messages and close their doors to those who don't look and think like them. They preach a "gospel" of intolerance toward those born outside our country, and seem to forget that we all, at some point in history, owe immigration to our existence here.

It bothers me, too, that if the intolerance and hatred is this obvious toward race, what must the attitude toward the more "hot button" issues be? But I only have to talk to even my co-workers to find that out. The attitude toward the gay community is one of absolute disdain. They tell jokes, insult each other by making gay references toward each other. Transgendered customers are smiled at, then ridiculed as soon as they leave. It is a culture and a dynamic that is far from accepting, loving, or even slightly concerned for the welfare and needs of genuine people.

What has happened since those idealistic days of the 70's to bring us to this point? Where did we lose the battle for civility and acceptance? At what point did we move away from the principles of love and acceptance and opt instead for separation and hatred?

We can certainly blame some of it on a very loud minority. The most conservative religious movements scream and threaten and make so much noise that we lose any hope of civil discussion. Politically, recent administrations have controlled the nation by fear and false patriotism, creating an environment of suspicion and hatred. Corporations have come to control the political and social machinery of the country to the point that we are almost totally programmed by their advertising and propaganda. They control the process so completely that it's hard to know where they end, and political identities begin. Everything is seen as needing a profit, and we are encouraged to look out for ourselves first and only. As long as we have money and a house and all of the things that they say we should have, we are told all is well. Forget the homeless, forget the poor, forget the sick, forget the person who asks only for an opportunity to prove himself. In the new America, none of those people matter.

Somewhere, we have to find the button that will allow us to reset our priorities and thoughts to the Civil Rights era. We need to again preach and scream from the mountaintops, from the churches, from the synagogues, from within the covens and every other place the need to put people above money. To put people above possessions, and above corporate policy.

It's not really a liberal idea, even though I am still the liberal I was when I started writing this. It's a human idea. It is the idea that fits best within every major religious system. It is the idea that will keep us from eventually destroying our planet and ourselves with out of control hatred and isolation. 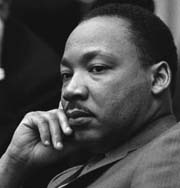 A great leader once preached a great sermon. "I Have a Dream" rang loudly and changed the world. Is there a button somewhere we can push to hear again those powerful and transforming words? Do we still have a dream of finding equality and happiness and hope for ALL of humankind? And if we do, are we willing to do the heavy lifting and hard work to overcome the decades of wandering away from that dream?