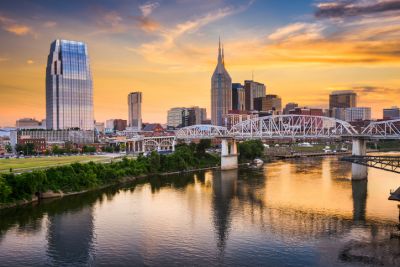 Nashville, Tennessee, is one of the hottest housing markets, according to Zillow. The town, also known as Music City, is home to country music and Vanderbilt University. In its early days, it was an important shipping town with a healthy economy. Even though Tennessee sided with the South during the war, Nashville fell to the Union troops. After the war, the city was able to recover economically because it was a transportation hub for shipping products. Music City not only has a rich heritage of country music; it also has some beautiful religious sites that should be on your list if you get to Nashville.

Although this beautiful neoclassical building functions as an art museum, its heritage is in Greek mythology. Nashville has been called the “Athens of the South.” When Tennessee was celebrating its centennial, the city built this full-scale replica of the original Parthenon in Centennial Park. It’s a stunning piece of architecture that has been preserved by the city. The pièce de résistance is the 42-foot-tall replica of the statue of the Athena Parthenos, covered in golf leaf.

Nashville is home to 600 churches, but the Downtown Presbyterian Church has to be one of the most stunning. The architecture is Egyptian Revival, one not seen in many places in the United States. During the Civil War, this church was a hospital with 206 beds. In World War II, the church allowed soldiers on leave to sleep in the building. President Andrew Jackson was a member of the church in its early days.

This museum features beautiful artwork that represents Christianity through the years. During the Christmas season, a holiday exhibit of nativities is the special focus. During Lent, the museum hosts a special collection of artwork that tells the Passion story. But the focal point of the chapel is the almost life-size wood carving of Leonardo da Vinci’s “Last Supper.”

St. Mary of the Seven Sorrows

This church is the oldest extant church in downtown Nashville, built from 1844 to 1846. The architectural style is Greek Revival, with two fluted Ionic columns in fronts. Adolphus Heiman, a German immigrant, designed the church and many other Nashville buildings. The first pastor of the church, Bishop Richard Pius Miles, OP, was instrumental in moving Catholicism beyond the Appalachians. There is a movement for his canonization by the Catholic Church.

McKendree’s history dates back to 1787, the same year the forefathers were writing the Constitution. There have been four buildings on the site. The first building was damaged during the Civil War. The second building was dedicated in January 1879. Nine months later, the building was wholly destroyed by a fire. Another fire, this one caused by fireworks, destroyed the third church building. The present building was completed in 1910. The stained-glass windows were made by Gerichten Art Glass Company of Columbus, Ohio, and installed as the building was erected. The church also houses an “echo organ.” The exterior of the church is breathtaking, but even more so when you consider what the congregation endured and overcame.

Church of the Assumption

Bishop Miles dedicated the first building of this congregation that was built for German immigrants. The original building did not fare well through the Civil War, but the congregation rebuilt and restored the building. The priests who served the parish added many elements to enhance the building, such as a chancel, stained-glass windows depicting the life of Christ and a Baptismal font. Sadly, after World War I, much of the restoration was painted over by the newer priests. In 1970, there was talk of closing the church, but a priest who was a skilled woodworker determined that the building could be restored and did just that. Today, the church is on the National Register of Historic Places.