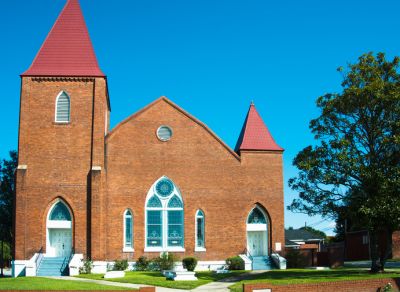 Nine of Augusta’s neighborhoods are listed on the National Register of Historic Places. The city is home to many significant sites pertaining to American history during the Revolutionary War and the Civil War. Magnolia Cemetery is the final resting place to many of Augusta’s most noteworthy citizens, including Brigadier General Thomas Glascock, who served in the War of 1812, and seven Confederate generals, as well as many other veterans of the biggest conflicts in America’s history. Augusta is also the boyhood home of President Woodrow Wilson. It’s thought that the memories of the wounded soldiers contributed to Wilson’s efforts in his adult years. Here are three more important churches in Augusta’s history.

Rev. Dr. Joseph Ruggles Wilson pastored this church from 1858 to 1870. His son, Woodrow, grew up in the manse of this church, but the church has more connections to the history of the United States than just being Woodrow’s childhood church. It’s one of the oldest standing churches in Georgia. It still meets in its original sanctuary, which few churches in Augusta, in Georgia and in the South can claim. The architect of the church, Robert Mills, also designed the Washington Monument. The building was constructed between 1809 and 1812. During the Civil War, the churchyard served as a Confederate hospital. During World Wars I and II, the church was a center of religious activities for soldiers.

Today, the Woodrow Wilson Boyhood Home, the manse that housed the family, is a National Historic Landmark and open for tours. During his childhood, Woodrow was known as “Tommy.” You can see the place where he tried to etch his name into a window when visiting the manse. The house is now owned by Historic Augusta, Inc., but the organization has worked hard to restore the building to its original style when the Wilsons lived there.

This church is one of the earliest independent black congregations not only in Georgia, but in the United States. There are two historic buildings that sit on its campus. The 1801 building was built in the style of a New England meetinghouse, which is rare to find in Georgia. Today, this building is used for offices and a meeting center, while the 1897 building is the regular sanctuary. The newer brick church is an example of Late Victorian Gothic style with pointed-arch windows, tower buttresses and gabled parapets. Historically, the church was important to the African American community, as it spanned the change from slavery to freedom. Morehouse College originated with this church.

Church of the Most Holy Trinity

This church organized in 1810. Its building is the oldest surviving Catholic Church building in Georgia, but its importance to the health of Georgians goes far deeper. During the 1839 and 1854 Yellow Fever epidemics, this congregation tirelessly worked to promote health for Augusta citizens. The church served as a hospital during the epidemics. Federal prisoners of war were treated at the church during the Civil War.

The cornerstone of the church was laid in 1857. Its architectural style is that of Romanesque Revival. The Yellow Fever epidemic and Civil War were just two of the obstacles faced in building the church. Building material could not get through the blockades. The Jardine organ, one of the largest in the country, did not arrive in Augusta until 1868, because it was too bulky to smuggle past the blockade. Even so, the church was consecrated in 1863. The octagonal bell tower and spire weren’t added to the church until 1894. Artists who decorated the church integrated the architecture with their paintings and sculptures. Look for beautiful murals that highlight elements of architecture. The stained-glass windows above the altar are original to the construction of the building.