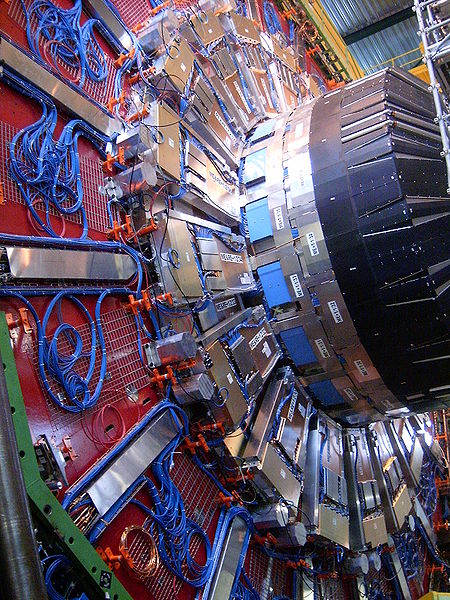 The Large Hadron Collider outside of Geneva was constructed in hopes that it would offer us a window in on the subatomic world.Ã‚ It is a massive underground track where protons are smashed together to create miniature explosions.Ã‚ Scientists attempt to piece the scene back together much like an investigator at the scene of the crime to shed light on the forces that were at play at the beginning of the universe, including something known as the God particle.

The God particle has long been theorized to give mass to other subatomic particles, but an exciting new test of scientific possibility is on the horizon Ã¢ " time travel.Ã‚ Physicists are positing if they observe the God particle at the Large Hadron Collider, the creation of it will also bring about what they call Higgs singlets that can ripple back into the past.Ã‚ Currently there are strong constraints about how far back in time these singlets can travel, and the unique substance of them prevents us from sending other things, such as people or objects through this supposed time-machine.Ã‚ In an astonishing theory, a pair of physicists claims we would be able to send information and messages to our former selves!

In such a confusing field of study, it is easy to let our imaginations run wild.Ã‚ Should the constraints about how far into the past we could send these messages be too stringent, what would that mean for human history?Ã‚ A disembodied voice sent to an era in which people would not be familiar with the idea of modern technology could cause quite a stir.Ã‚ Religion and superstition often attribute such unknowns to a higher power.Ã‚ Is it possible that we are the "supernatural" beings our ancestors claimed to have been in contact with?

At the Universal Life Church Ministries, we bring together the teachings of spirituality with the advantages of technology to help you get ordained online.Ã‚ However, many people see science and religion as somewhat at odds.Ã‚ Given the notion of time travel, might science have been the source of the practices and events that evolved into the religious dogmas science seems so at odds with today?

You might be familiar with the Grandfather Paradox.Ã‚ If you can travel back in time, you could kill your grandfather, thus preventing your birth and your subsequent murderous trip back in time.Ã‚ But if you were prevented from doing so, your grandfather would survive, and the line leading towards your birth would be unbroken.Ã‚ This puts you in an impossible loop.Ã‚ There doesn't seem to be any inconsistency, however, with the idea of going into the past to save your grandfather from a fatal accident.Ã‚ Scientists are considering the possibility that the creation of the God particle before our eyes might be so abhorrent, such an affront to the workings of the universe, that the singlets it produces would ripple back in time and destroy the Large Hadron Collider's attempts at viewing the God particle.

Many faiths present the idea of our vision of the world as being from behind a veil.Ã‚ Should we take a peek around the veil, the consequences could be dire for us, or at least beyond our understanding.Ã‚ Could there be a higher wisdom involved in affixing this veil that works in the same way that using time travel to save your grandfather fixes the paradox?Ã‚ Are we being kept from the true nature of reality by the benevolence of God, or the deception of Satan, or do you think these developments are free of any spiritual resonance?