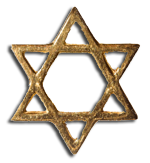 I heard the anxiety in my mother's voice when I announced some thirty years ago that I no longer believed in God.

"Maybe you should talk to someone," she said.

I was 19 and a sophomore at the Jewish Theological Seminary and Columbia University. I'd grown up unquestioningly believing in God like my mother, her family, most of whom were quite religious, my father, his family, and my Hebrew school friends.

"Who?" I said, not surprised my Jewish mother was freaking out about her son's sudden rejection of a God that comforted her daily.

"Someone at the Seminary," she pleaded.

So I made an appointment with Neil Gilman, who'd been my freshman Jewish philosophy professor and was the dean of the rabbinical school. He later went on the write a book that received a national Jewish book award, Sacred Fragments.

I explained to his secretary that I no longer believed in God and wanted to discuss theology with Dr. Gilman. I was nervous several days later as she escorted me into Gilman's book-lined office. I was a gangly teenager who hadn't yet taken most of my academic time seriously and he was a dean, a professor, a rabbi, a noted scholar.

"So what brings you here today?" Gilman asked.

"I've already explained it to your assistant."

"Well," I stammered, "I'm not sure I believe in God anymore."

He stood up, extended his hand, and said, "Welcome to the club."

His comments calmed me and we then began a series of sessions for the next few months in which we discussed God, faith, and philosophy. Gilman's main point that has stayed with me for more than 30 years was that belief and faith are on a spectrum. As he said then, "Sometimes we believe more and sometimes we doubt more."

I haven't wavered much from declaration of agnosticism, but faith has been on my mind lately because my wife has stage IV metastatic breast cancer and her oncologist said she might only have a few months left to live.

My wife has been on the healing list of two local synagogues since she was first diagnosed in 2006. My mother, who lives in Connecticut, enlisted the support of her rabbi and all the congregations in the Greater Hartford area to pray for Verna. We have countless friends and family beseeching the Heavens on a daily basis, and a woman I've never met in Indiana added us in the prayers of her church.

All these prayers reaching upward may or may not have the desired effect and slow my wife's cancer and prolong her life, but they can't hurt. My problem is I don't have any faith or belief in the power of prayer or a Deity to hear those pleas, so I don't ever take any time to offer anything on my own.

The Jewish philosopher Abraham Joshua Heschel, who marched for civil rights with Martin Luther King, said that people connect to God not through intellect, reason, or a leap of faith, but rather a leap of action, based on experience and sacred deeds.

But faith remains a powerful force for so many. Shortly after a hurricane ravaged Florida a few years ago, a relative said, "We were unharmed. God heard our prayers." I couldn't help thinking: did God ignore those of the people who were harmed? My wife and I lost a close friend several years to breast cancer. Did she die in part because she didn't pray hard enough? And after a pain crisis a few weeks ago, my wife's health has rebounded somewhat, leading another relative to take credit.

"It was because I had faith and prayed," she told me.

Is that how God works? The Old Testament God certainly worked through history. We have the parting of the sea, fire and brimstone on Mt. Sinai, Noah and the flood, and the Garden of Eden. But that version of God was most likely developed over a period of many years by various communities and editors with a particular vision and perception of a Deity.

On the other hand, I find it profoundly powerful that hundreds of people are marshaling prayers to heal my wife. I can clearly imagine a rush of prayerful energy finding its way across rivers, valleys, ocean, and out into the universe. That is very comforting to us.

But I can't yet participate in those prayers in any meaningful way. I am still muddling through to form my own spiritual connection to the world. I am a seeker who is open to wonder.

Welcome to the club.