“Buddha of Oakland” Reduces Crime by 82% 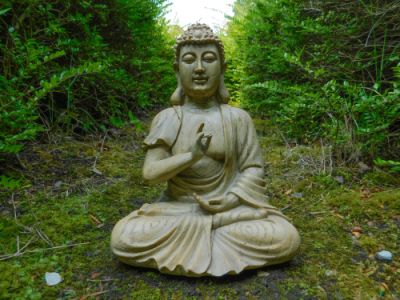 Known for the Oakland Raiders and origination of "The Wave," that ubiquitous fan participation event now seen in stadiums across the country, Oakland, California, likewise is known for its extraordinarily high crime rate. But for one neighborhood, a 2-foot-high statue of Buddha has managed to reduce the crime rate by 82% in the past five years.

Known locally as the “Buddha of Oakland,” this little guy originally was the idea of Dan Stevenson, a neighborhood resident who back in 1999 had enough of the crime he saw happening every day, particularly the drug dealing. He also decried the graffiti and trash that built up over time. Per Stevenson, “It was junk, just continual junk.”

The Arrival of Buddha

One day, after his numerous calls to the Oakland Public Works Department went unheeded, Stevenson had an epiphany of sorts. Even though not religious himself, he got the bright idea of installing a small statue of Buddha on a rock in the median strip of his neighborhood’s main intersection. His intention? “Shift the energy” of the neighborhood.

Amazingly enough, it worked. Crime started going down almost immediately. In 2010, the local Vietnamese community took over maintenance of the Buddha and even built a shrine around it. Every morning the neighborhood’s Vietnamese residents show up to clean and sweep the whole area. And, according to Stevenson, people — Buddhists and non-Buddhists alike — come to the iconic statue to worship, pray, meditate, or simply talk to the Buddha while walking their dogs. Per Stevenson, “It just kind of turned the whole thing around to zero.”

Buddhism represents one of the world’s major religions. It is estimated that 535 million people — roughly 8-10% of the world’s population — practice Buddhism worldwide. In the following six countries, Buddhists account for at least 55% of the population:

In the US, Buddhism attracts 3-4 million adherents, most of them Asian-Americans.

The word “buddha” means “one who is awake.” And what is a buddha awakened to? To the true nature of reality.

The story goes that the original Buddha was a real person named Siddhartha Gautama, who was born in Lumbini, Nepal, about 567 B.C. The son of a king, he lived a life of opulence for the first 29 years of his life. Then, however, he took a carriage ride outside the palace grounds one day and saw three things: a sick person, an old man, and a corpse. The realization hit him that all of his privilege and opulence could not protect him from sickness, old age, and death. When he then saw a mendicant holy man (a spiritual seeker), he determined to seek peace of mind.

Enlightenment finally came to him after meditating beneath a ficus tree known as “the Bodhi tree.” In other words, he “awoke” to the real meaning of life and became known ever after as the Buddha.

Ultimate enlightenment comes when one finally discovers buddhanature, the fundamental nature of all things. And note the word “discover.” For Buddhists, buddhanature is always there. You just have to discover it for yourself.

Whether or not anyone has achieved enlightenment by visiting the Buddha of Oakland, no one can deny that this particular Oakland neighborhood has seen a massive turnaround since Dan Stevenson installed this particular little Buddha statue in his neighborhood.