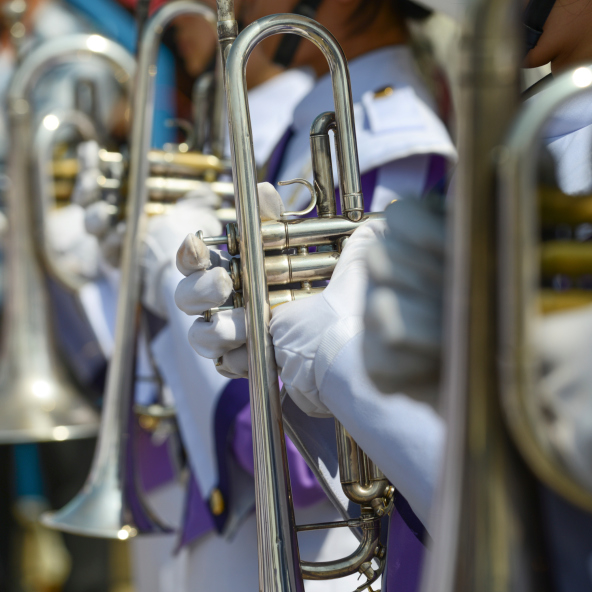 Marching Band trumpet[/caption]High school football games often contain performances by a marching band. Different schools have different traditions, and most of the time the students, staff, parents, and alumni hold the traditions near and dear to their hearts. At West Laurens High School in Dexter, Georgia, one of the traditions is that the band plays the religious hymn "Amazing Grace" at weekly football games. Afterwards, there is a moment of silence in which the crowd recites The Lord's Prayer. This is something that has been done for quite some time and the school has no plans to stop it anytime soon.

You have likely heard the song before, but if you haven't, here is some information on it:

The first verse (and part of the song most commonly sung) goes like this: "Amazing grace, how sweet the sound, that saved a wretch like me. I once was lost, but now am found; was blind, but now I see." John Newton wrote the song in relation to his own life. It was written back in 1779. It is sung by Christians nationwide.

Americans United for Separation of Church and State

Despite the long held tradition, a group called Americans United for Separation of Church and State has requested the band stop playing this song during the football game. They have requested a different song be played and that instead of reciting The Lord's Prayer afterwards, the crowd simply observe a moment of silence. This is not the first time the group has asked the school to stop playing the hymn. Back in May, Americans United asked the administration to get rid of the song. In response to the letter, the band teacher simply asked local churches to attend the game to make their statement even bigger, and nothing was changed.

As you may have guessed, the school has been less than thrilled about being asked to get rid of their tradition of playing "Amazing Grace" and saying The Lord's Prayer afterwards. In fact, they have not given into their request and have continued to play the song and recite the prayer. Students enjoy the tradition and have no plans to get rid of either one anytime soon. One student mentioned that she did not feel the group could tell them what they could and couldn't do. Another agreed with the sentiment, saying it was up to the school to decide whether or not it was okay for them to continue their tradition.

Supporters of the School

People who side with the school agree with the students' comments. It's not like the school is asking people to convert to Christianity or requiring everyone who attends the games to sing along and recite the prayer. Anyone who feels uncomfortable can simply sit quietly. It's not a requirement in order to get into the football games. It's a tradition that sets the school apart from other schools, and it is something everyone associated with the school enjoys. This is the first time anyone has had a problem with it, and it isn't a student or parent who is complaining. It is a third party who has nothing to do with the school.

Supporters of Americans United argue the singing of a religious hymn and reciting of a Christian prayer interferes with the idea of separation of Church and State. They say they cannot affiliate religion with the school when the school itself is not religious.

Americans United has written a letter to the school district, asking them to require the school to stop the tradition. The group is requesting that they receive a response within two weeks regarding the situation. If the district rules in the school's favor, it will be interesting to see whether the group lets it go or if they choose to take it to the next level.