A Survey of Global Religion and Values 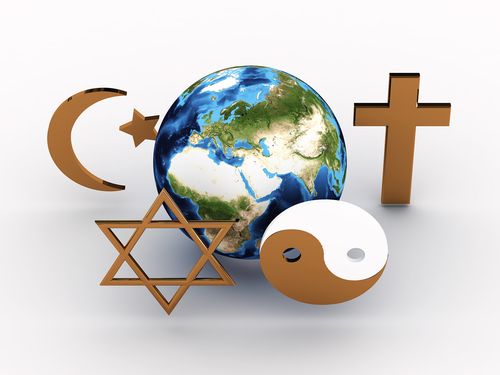 The Pew Research Center recently conducted a large survey to gather information on people’s opinion of religion and morals across the globe. Over 38,000 people from 34 different countries were asked a variety of questions to determine where they stood on a global spectrum. Among the questions asked were how religion coincides with other personal traits and how people view religion as affecting personal morals. While far from painting a perfect picture of everyone in the world, the results were interesting and worth taking a look at.

How Does Religion Relate to Other Traits?

The likelihood that a person belongs to a particular religion often correlates with other traits, such as where he or she lives, economic status, age, and race. While this may initially seem unsurprising, it can have some interesting implications. For example, people who live in more underdeveloped areas or have a lower economic status than others around them are more likely to value religion as a vital part of their lives. People who are more educated or have a higher income are more likely to hold the opinion that belief in God is not necessary to be a morally good person.

Religious belief is very prominent globally, with around 62% of people surveyed across 34 diverse countries agreeing that religion is very important to them. These results included responses from people from many different religious and cultural backgrounds. While strong religious belief is still very widespread, whether it is becoming more or less so can vary depending on the area examined. In Russia and surrounding countries, for example, religion is becoming more widespread. Greece also has a notably religious atmosphere, being the most religious country in the European Union. In many other parts of Europe, however, the number of devout worshippers has dropped since the early 90s.

The Overlap of Religion and Personal Values

Being religious often seems to come with a pre-existing set of morals, but how often do people's morals correlate directly with their religion? Do other cultural and personal factors change what people of the same religion may value in different circumstances? The Pew Research Center attempted to come up with an answer to these types of questions through responses from people from dozens of different areas across the globe. Across the diverse sample of responses that were gathered, just under half stated that a person needed to have a belief in god in order to be morally good. Unsurprisingly, those who were more religious were more likely to believe religion to be integral to being a good person.

People from the United States and Canada were more likely to believe that a person could have exceptional morals regardless of religion. On the other hand, many others from parts of the world such as Northern Africa and countries in the Middle East viewed religion (or lack thereof) as being nearly synonymous with being a good or bad person.

The way religion is incorporated into the lives of people throughout the world is constantly changing. While the population of some countries continues to become more religious, in others the number of devout worshippers is dropping. This data will likely continue to change over time.

While some people do believe that being a religious person is necessary for being morally good, others differentiate between personal values and spiritual beliefs. The survey recently put out by the Pew Research Center to gather this information sheds light on how demographics such as economic status and physical location overlap with global religious beliefs and morals. The results are interesting, and hopefully similar research will continue to be conducted in the future.

Thank you for this - This article is also from Pew from 3 days ago:

Thank you for sharing this information

Dirty feet are symbolic of sin, Song 5:3 and aloes, with all the trees made sister, A garden and to gather lilies. I am the rose of the valleys. and the lily so is my love with the tender grape symbolic of the journey of life, Eccl. 9:11 Live with wisdom; yea my heart concerning all things that are done and, behold, all is vanity of spirit, and vexation to know it, that men should fear yet surely know wherein I have laboured, a reminder of a man's relationship to his wife, Gen 2:22 that they might conceive before the eyes to be desired of knowledge made of the field; to till unto tribute. symbolic of watching, seeing, or knowing, Prov. 15:3 much less do lying and he that soweth that thou mightest answer of truth By mercy to his own soul: they lurk privily of the foolish shall fall. symbolic of disseminating information for other people