A Historic Mosque Reopens for Religious Use 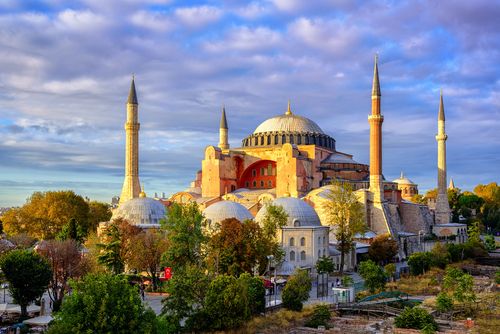 A big change for the historic mosque known as the Hagia Sophia took place this July when it was decided that the building would be reconverted into a house of worship. After decades of being preserved as a piece of history, the mosque will once again be a place for massive religious gatherings and prayer. The decision to change the building back to a functional mosque was somewhat surprising and has been controversial. While many people are excited for the opportunity to worship within a piece of history, others worry about the Hagia Sophia’s future.

What Is the Hagia Sophia?

A famous landmark and UNESCO World Heritage Site located in Turkey, the Hagia Sophia served as a museum and a secular space for over 86 years. Long viewed as a symbol of mutual acceptance and coexistence between Christian and Islamic worshippers, the building contains artwork and symbolism from both of these schools of thought. It is sometimes symbolically viewed as a connecting point between the East and the West, both due to its physical location and its representation of two different cultural ideas. The building has a rich history and existed throughout many changes in leadership and cultural identity within what is now modern-day Istanbul.

UNESCO chose the Hagia Sophia to be a world heritage site in 1985. An organization that is part of the United Nations, UNESCO claims legal protection over this and similar sites, which it declares to have historical, cultural, or scientific significance to the people of the wider world.

Why Is It Being Reconverted to a Mosque?

The Hagia Sophia is no longer considered a museum. The mosque recently reopened for the first religious prayer taking place within it in decades. This decision was made by the current president of Turkey, Recep Tayyip Erdogan, who declared that the mosque will continue to remain accessible for all who wish to visit it but that it shall return to its original function as a mosque for the foreseeable future.

How Is This Creating Conflict?

The decision to change the Hagia Sophia’s status as a museum has been met with mixed responses. On the first day that the building was reopened for prayer, it was occupied by the maximum number of people who could safely gather in the midst of the COVID-19 pandemic. Thousands of those who couldn’t gain access to the building gathered in the gardens surrounding it to participate from a distance.

Despite the fact that many worshippers were excited to be able to hold official prayers within a site with such rich history and significance, there is some concern about the building’s future. UNESCO representatives have expressed discomfort over the situation, trying to reinforce the idea in an official statement that the building should continue to be protected and remain unaltered from its current state. The Turkish government made the decision to turn it back into a mosque without discussing it with UNESCO, and the lines of communication between the world heritage organization and the Turkish government officials remain minimal and muddled.

Big Changes for the Hagia Sophia

The Hagia Sophia has been reopened as a functional mosque, but what this means for the building’s status as a UNESCO World Heritage Site remains uncertain. The Turkish government has claimed that the building will remain open to the public and anyone who wants to visit it can still do so. UNESCO representatives have been somewhat upset at this turn of events, as they have been largely left out of the loop on plans for the building. This historical site is something that everyone wants to see preserved. For some people, the transition back to a place of worship seems like an amazing decision, while others are concerned that this may put the famous mosque at risk of losing the history that makes it so unique.