How to Complete a Marriage License

If you're planning to officiate a wedding, one of your principal duties (aside from performing the ceremony, of course) will be to ensure the marriage license is correctly filled out. Before we jump into the nitty-gritty, let’s quickly cover the difference between marriage licenses and marriage certificates. While they might sound similar, it’s important to understand the distinction.

A marriage license is a legal document issued by the government and can only be obtained by the couple. A minister cannot get this document for the couple. The marriage license acknowledges that a legal ceremony took place. After the wedding, the license is signed by both the couple and the minister and needs to be returned to the government office that issued it for filing. A marriage certificate, on the other hand, usually has an artistic, polished appearance and includes much less information than a marriage license. This document is purely decorative, and is often used by couples to commemorate the special day of their wedding. 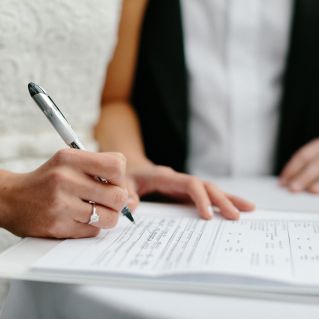 A quick side note: many of our ministers find that these certificates make for a wonderful gift to give to the couple after the ceremony. If you’d like to present the newlyweds with a marriage certificate, you can view the wide variety of styles and designs available in our online catalog.

Since filling out a marriage license can sometimes be confusing, we’ve crafted a sample version to help both ministers and couples become familiar with the process. The guide below is split into two parts: one for the couple and one for the minister.

Hover over each box for clarification on what must be included there. Consider taking some time to study this sample marriage license so that when you go to fill out the real thing, you’ll know what to expect. Scroll down to begin!

When the couple applies for a marriage license, this section will be filled out first. Both individuals will input some basic personal information, and the county auditor will usually sign here as well. Hover over the individual boxes to learn more.

The officiant section will be filled out after the ceremony has concluded. In addition to entering their personal details, the officiant must also make sure to sign the document. If the license asks for witness signatures, they will go here as well.

Note: For ministers in Hawaii, provide our address in the application instead of your home address.

I certify that the undersigned, by authority of license issued by the County noted above, did on this day join in lawful wedlock with their mutual consent in the presence of witnesses. In testimony whereof, witness our signature: 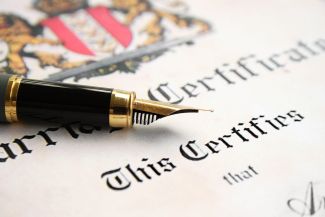